Lotus 163 Housing in the Expanded Field 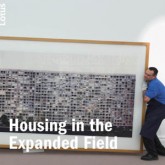 Some countries, after experimenting for several decades with housing programs based on the criteria of the Athens Charter and the philosophy of “large numbers,” have developed a new vision of planning that tries to go beyond the functionalist perspective of those models and look at housing in the broader context of the city or the community. The formulation of French proposals inspired by the city of streets and blocks instead of the huge buildings of the grands ensembles; the recourse to the modulations of traditional Japanese urban planning in a sprawling city that has put aside the infrastructural fantasies of the last century; the recent comprehension of the popular taste for self-building in Latin America: these make up a frame of references that brings authentic new perspectives into the panorama of contemporary architecture.